The country's biggest car maker has sold over 51,000 units of Maruti Ritz, since its introduction in the domestic market in May, 2009. Maruti Suzuki yesterday said that now it will setting eyes on familiar car 'Maruti Eeco' to export the small car in abroad countries such as Middle East and South-East Asia. Ritz has already shipment in Indonesia in the previous month, we have sent a big delivery of 500 units of Ritz to Indonesia last month, will also look into possibilities in other markets for export the car, told a news agency Shashank Sivastava, Maruti Suzuki India Chief General Manager (Marketing). The small cars are coming from A2 segment includes with Maruti A-Star, Fiat Grande Punto, Hyundai i20, Honda Jazz, Tata Indica, Chevrolet Spark, Maruti Wagon R and Maruti Swift. Maruti Ritz has a tall-boy design. In the highly competitive A2 segment, this car corresponds an ideal combination of a family car, Sivastava said. 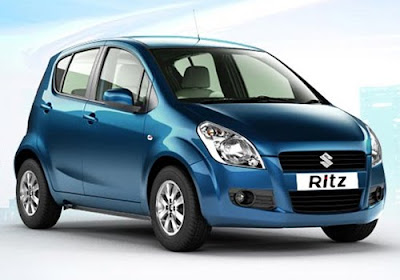 The car available in both petrol and diesel versions with a new generation K-series engine, which will meet Bharat Stage-IV emission norms. Maruti Suzuki could also focus on other countries like Morocco, Algeria and Egypt and among other selling the small car. In Indonesia, its dealers based on feedback that the company would take a conclusion about add-on new markets. Sivastava said that South-East Asia and the Middle East should be greatest markets for Ritz," We will consider those countries, where we are already in strong position for small car market. Toyota Corolla is the most popular car in India. Apart from it, Toyota has intends to introduce its new upcoming Toyota Etios in the country.
Posted by avika at 8:52 PM