Maruti Suzuki India Limited is going to become the biggest car manufacturer in the world. The company is planning to produce more than one million or ten lac vehicles yearly. Maruti suzuki India's largest auto maker has always been the first option for Indian car customers. The company cheers production of 1-million vehicle for the financial year 2010. Maruti recently Joins the 10-lakh club in which well renowned motor companies are there like Toyota, Hyundai, Renault, Nissan, Ford, Honda and Volkswagen. Maruti has exceeded its parent company in production previous year. The company is not only raising its production capacity but also establishing a world class RD unit in India for development and research of best models in the country. 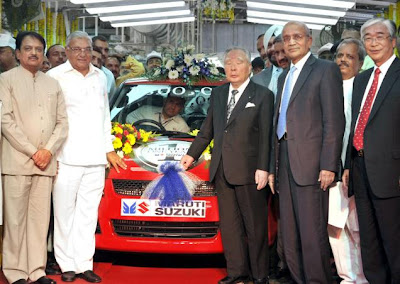 Suzuki Chairman Osamu said, "The company will introduce Maruti Swift in red colour from the production line which will be the one-millionth vehicle from the Maruti. The company has also undertaken a big task of introducing a completely made in India car including design, development, production and conceptualisation in the country. Maruti Suzuki India (MSI) Chairman R C Bhargava stated to press," When we started the company since 1981, nobody expected that it would last beyond 3-4 years, also nobody believed that it would become one day a produce even one lac units.
Posted by avika at 3:00 AM